Posted on December 12, 2018 by eaparmenianewsletter

Armenia is located in the Caucasus in a geopolitically tense region. Closed borders, few export products. This is why the country strives to occupy a niche with full force: the IT-Sector. The country does not only want to reconquer its role as the Silicon Valley of the former Soviet Union but surpass it by far. 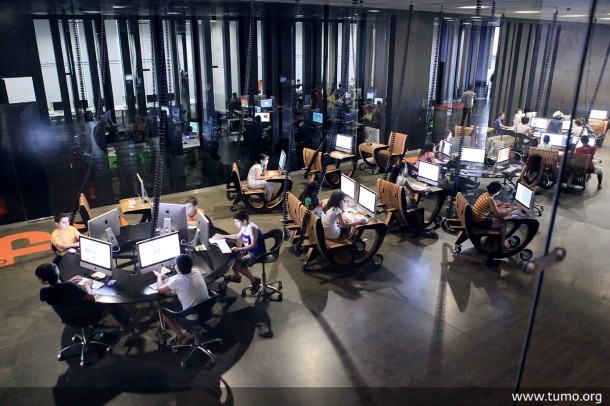 More than 10.000 pupils are learning how to program and webdesign in the Tumo Center after school. Foto: Tumo.org

Only two more clicks until Hakob is satisfied. He adjusts the body of his racing car just a tiny bit, then it looks as sporty as he has imagined it to be. “Ready”, he says, claps his hands and saves his 3D-model. Hakob is 12 years old. The car is part of his second computer game – programmed on his own. “Playing soccer at Banants Yerevan or learning keyboard might be cool as well”, he says and stands up behind the Mac. “But nothing is as cool as programming.” When Hakob is grown up, he does not want to become a soccer player but a programmer.

At “Tumo” he is on the right path: The digital media learning center free of charge in the capital Yerevan allows more than 14.000 young Armenians to acquire all the tools necessary for becoming an IT-specialist – for free and voluntarily. Among the subjects offered the kids find programming, robotics, web-design, game development or machine learning.

“At Tumo the kids do what they are up to and learn with fun” says Vahag Bshtikian, who once was a Tumo student as well. The family background of the pupils did not play any role, everybody would start at zero. Bshtikian is convinced: “In ten years Armenia will be a world leader in the IT-Sector.”

A good reason to stay

Since its opening in 2011 boys and girls aged 12 to 18 visit Tumo once or twice a week. Kayne West has already visited the center in Yerevan.

The modern architecture, flooded with light, offers hundreds of co-working spaces with Macbooks and lends Tumo an utopian touch. Inside Tumo it is easy to forget the social situation in front of the doors: Armenia was shaken severely by the collapse of the Soviet Union, it is the poorest country in the Caucasus region, characterized by the Nagorno-Karabakh conflict and corruption. Applicable for many people: those who can afford, leave the country.

Tumo is a good reason to stay. For those who own an Armenian passport and are aged between 12 and 18 there is only a short registration necessary until they can start and immediately put together their study plan consisting of workshops, autodidactic exercises and projects.

Nation of mathematicians and chess players

The center, which has already branches in three other Armenian cities, is financed by the “Simonian Educational Foundation” of Sam and Sylva Simonian.

Sam Simonian is the founder of the globally leading telecommunications company “Inet”, the couple live in the United States. Armenian organizations had substantially contributed to their success, with Tumo they want to return something to the Armenian community, they say. “Tumo provides access to equipment that normally would be unavailable”, says Sylva Simonian.

Hrayr Shahbazyan has managed, what Hakob is still dreaming about. One year ago he founded his own start-up: A platform for virtual chess lessons. “WooChess” brings together chess coaches and students from all over the world. One hour of teaching by the chess grand master easily costs 100 US-Dollars. Shahbazyan sees a connection between Armenia’s success in the field of chess and the rapidly growing IT-sector – 25 to 30 percent a year: analytical thinking and math skills would be necessary for both fields.

The founders of WooChess turned their hobby into a career. The market-orientation was internationally from day zero. Foto: Marie Illner

“Silicon Valley got its name from silicium – the basic material for the production of electronic semiconductors”, says Shahbazayan. “We could call ourselves Chess Valley” he says as laughs. In his eyes Tumo is a revolution in the field of digital education. “Our competitive advantage: high quality for a low salary”, says Shahbazyan. In 2017 the gross monthly salary in Armenia amounted 358 Euros.

Back at the Tumo Center: concentrated kids are sitting behind more than 400 working stations, some bustle around the snackbar. Maria is studying the programming language JavaScript, Arthur is watching a short video about sound design and Gevorg is taking a quiz on the topic of HTML.

Tumo wants to be more than a learning center: Several sport fields are located behind a self-programmed fountain with light effects, even kids with autism have already successfully passed the “Tumo path”.

Chancellor Angela Merkel, who also visited Tumo in the course of her journey to the Caucasus, was elated, everybody says. The German ambassador in Armenia, Bernhard Kiesler, also speaks enthusiastically about Tumo: The center was a “blueprint”, even an “export hit”.

There are concrete plans for Tumo centers in Paris, Tirana and Moscow, Merkel wants to explore the possibilities for a German Tumo center with state minister Dorothee Bär as well. People are proud in the Armenian ministry for education: “We pay a lot of attention to the IT-sector”, says Hovhannes Hovhannisyan, Deputy Minister for Education.

The efforts are successful: More than 600 companies are active in the IT-sector, a third of them is foreign-owned. Among the well-known IT-giants of Armenian origin you find the foto-editor “PicsArt”, the self-learning platform for programming languages “SoloLearn” and the online-video-maker “Renderforest”.

However, Hovhannisyan still sees need for action: There was a lack of specialists and the cross-linking between companies and universities had to be promoted, he says.

Liana Hakobyan sees the same problems: “The start-up scene in the IT-sector is rapidly growing”, says the 20-year old. Last year she also founded her own company: “Breedge” – a service company that matches students and employers via an algorithm that does not only take into account language skills, internships and studies, but also aligns personality profile and business culture.

Liana Hakobyan, aged 20, is leading her own start-up. More than 30 percent in the Armenian IT-sector are female. Foto: Marie Illner

Ever more attractive for investors

Hakobyan feels like being at the right place at the right time. “We are the generation that needs to give Armenia the crucial push”, she says. The political situation would play an important role: “The trend of young people leaving the country has been stopped by the revolution, more than that Armenia is becoming ever more attractive for investors because of the change of government”. In April thousands of people went on the streets to protest against the former government. Shortly after, opposition leader Pashinyan became the new prime minister.

The atmosphere for start-ups is characterized by an optimistic mood. For many, especially those who have been socialized in the socialistic system of the Soviet Union, all this sounds like real freedom. “The revolution shows that the future is coming even faster than we have expected”, says Bshtikian .

A lot of young Armenians do not want to hear the question “Europe or Russia?” anymore. Indeed, the EU gives impulses for modernization and Russia guarantees security, but role models can already be found somewhere else. “Steve Jobs has an Armenian adoptive mother, he is my role model”, says Hakob in the Tumo Center. Hakobyan says: “We want to concentrate on our own country.”

Estonia as a role model

It is not that easy: located between Georgia, Azerbaijan, Turkey and Iran, Armenia has always been exposed to many different geopolitical interests, 4.1 percent of the GDP is spent on military expenses. Due to closed borders many products can only be imported and exported via huge detours through Georgia and Iran.

Estonia could be a role model – The former Soviet country is birthplace of Skype and ascended as a leading high-tech-nation.

Hakobyan and Bshtikian  do not fear a braindrain. “I am Armenian, so the problems of the country are also made for me”, says Bshtikian . Hakobyan wants to stay as well – because of the familiar community and the liberal IT-sector.

Be so good they can’t ignore you

You can also sense the optimistic mood in the Hero House – an innovation hub supported by the EU that helps start-ups in the field of Internet of Things, Blockchain, cyber security and machine learning. One enters the building with a digital fingerprint, at the walls you find pictures of super-heroes, the toilets are “all gender bathrooms”. The office of the director Ashot Arzumanyan seems creatively messy, books about artificial intelligence are dispersed on his desk.

Adam Bittlingmayer is sitting behind his computer and feeds it with data for his machine translation project. At the wall next to him you can read the slogans “Be so good they can’t ignore you” and “Less meetings, more doing”. The 33-year old speaks seven national languages and three programming languages, he studies informatics in the US and signed his contract with Google translate at 21.

Signed his contract with Google at 21: Adam Bittlingmayer was disappointed of Berlin as an IT-location. Foto: Marie Illner

“I own a video-streaming company and made my choice for Armenia on purpose”, says Bittlingmayer. Five years of “tax holidays” for IT-Start-Ups were among the motives. “I was disappointed of Berlin as an IT-location”, he says. Just this morning he had problems with his server because of a locked website in Germany – closed by GEMA. “The EU commits suicide in the fields of IT”, he thinks. Too little autonomy, too little competition between the countries, no top universities in the IT-sector and too many equalizing official requirements.

“No wonder that no big cloud operator is based in the EU”, he says.

Not least because of this reason Arzumanyan believes in the potential of his home country. “Armenia is a small country, entrepreneurs are oriented to the international market from the beginning”, he says. Judged per capita, Armenia would soon become a leading IT-nation. English? Russian? Chinese? “Those who can program and understand deep science like physics speak the next world languages”, he is convinced. The Armenians do speak them.

Marie Illner works as a freelance journalist for several newspapers, among them “Westdeutsche-Allgemeine Zeitung”, “Frankfurter Allgemeine Zeitung” and “Spiegel Online”. She mainly covers politics and society, with an emphasis on interviews and reportages. Marie Illner has a Bachelor’s degree in English and Media Science and currently studies Media Science as a Master’s-program at Ruhr-University in Bochum.