Posted on June 9, 2015 by eaparmenianewsletter 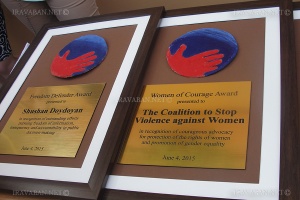 Yerevan, Armenia – The U.S. Embassy, Delegation of the European Union to Armenia, British Embassy, OSCE Office in Yerevan, Council of Europe Office in Yerevan and the United Nations Armenia Office honoured individuals working to promote human rights, accountable governance, local government reform, and free speech in Armenia at the Universal Rights Awards Ceremony at the Congress Hotel in Yerevan. Since 2012, the Universal Rights Awards Ceremony was the first multi-mission initiative to highlight the contributions of Armenia’s civil rights activists, government officials, and media and civil society representatives to the promotion of human rights. Armenian government officials, foreign diplomats, NGO representatives, and the press attended the event.

Ambassador Andrey Sorokin, Head of the OSCE Office in Yerevan, presented “Freedom Defender” award to Shushan Doydoyan, President of Freedom of Information Centre. “A long time partner of the OSCE, Shushan has been a tireless defender of human rights and fundamental freedoms. My Office appreciates Ms. Doydoyan’s commitment toward the promotion of open, transparent and accountable governance as well as her efforts to establish alternative mechanisms for resolving media-related disputes”.

The British Ambassador to Armenia, Kathy Leach, awarded Zaruhi Mejlumyan the Media Excellence award. “Journalists play a crucial role in exposing the failures of justice systems all around the world.   Some journalists are in fact campaigners – actively, consciously and deliberately exposing injustices, righting wrongs, raising awareness, helping individuals and pointing out systemic problems. I am delighted to announce that the Media Excellence Award this year goes to Zaruhi Mejlumyan in recognition of her outstanding professionalism and commitment in writing about, and defending the human rights of, prisoners facing life sentences.”

H.E. Richard Mills, Ambassador of the United States of America gave the Government Reformer Award to the Anti-trafficking Working Group (IAWG). “Congratulations to the IAWG, which is this year’s recipient of the Universal rights Award for Government Reformer.  The IAWG is made up of dedicated professionals who contribute to counter-TIP activities and cooperation between the Government of Armenia and civil society through programs to prevent TIP crimes, provide assistance to victims, prosecute traffickers, and build partnerships.  The IAWG represents the best of government –civil society cooperation, and its impressive results demonstrate that when government and civil society work together and listen to each other, they are more effective agents of change”, said H.E. Mills.

The Head of the Council of Europe Office in Yerevan, Mrs Natalia Voutova, awarded Mr Artsruni Igityan, mayor of Akhuryan village, with the “Local Government Reformer” award. “Under Mr Igityan’s creative and environmentally conscious leadership, Akhuryan community became a healthier and friendlier place to live – a place, where the social rights of citizens are better protected and promoted”, said Mrs Voutova. 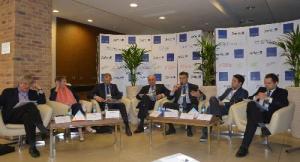 The three-day conference, which ends today, aims to conduct a wide-ranging discussion on strengthening the security dimension of the EaP covering the spectrum of possible soft and hard measures.

At the end of the conference, a resolution with practical recommendations will be adopted, which will be presented during the EaP CSF advocacy campaign on security issues in the framework of the European Neighbourhood Policy review. (EU Neighbourhood Info)

A first training under the school forestry education programme in Armenia, organised by the EU-funded project FLEG II, has brought together 27 school pupils, 2 teachers and 2 school directors from three communities of the southern Syunik Region.

During the training, participants were taught theory through educational seminars and received packages with education materials, and also took part in field forest activities on a selected forest area, a forest cleaning event and a school contest on the topic of forests.

In addition, the project donated field tools to Tatev School to be used during school forestry field activities. School forestry for the schools of Tatev, Svarants and Tandzatap communities is a very important contribution to provision of forestry and environmental knowledge to school children and making them more motivated for nature protection, said Norvard Movsisyan, Director of Tatev School.

The €9 million ENPI FLEG II programme deepens reforms in forestry policy, and legal and administrative matters in the sector while carrying out pilot projects, and addressing forest fire and climate issues. It builds upon the achievements of its predecessor, ENPI FLEG I programme. (EU Neighbourhood Info)