Posted on March 4, 2014 by eaparmenianewsletter

EU should apply maximum diplomatic pressure on Russia to immediately withdraw military forces from Ukraine, and join with US to isolate Russia through tough trade sanctions if Russia does not comply

The Steering Committee of the Eastern Partnership Civil Society Forum welcomes the conclusions of the EU Foreign Affairs Council meeting on 3 March 2014, namely the condemnation of the violation of Ukraine’s sovereignty and territorial integrity by Russia, and the decision to take targeted measures in the event that Russia does not de-escalate the conflict.

We call upon EU member states and the European Council to apply maximum diplomatic pressure for the immediate withdrawal of Russian military forces to their permanent bases, and for an EU observer mission to be despatched to monitor the situation in the Crimea.

Stop the Threat of War!

There are no grounds for military intervention into the internal affairs of a sovereign state: there are no vicious and mass human rights violations or crimes against humanity, there are no violations of rights of the Russian citizens in the Ukraine. The threat of military intervention under the pretence of “protection of national interests” is fully inadmissible for a state which considers itself as democratic, observant of the rules of international law, and moreover, a member state of the UN Security Council. We are also deeply concerned over the information about the deployment of the Russian military representatives on the Crimea peninsula which already begun.

We call on all Russian citizens not to succumb to military hysteria, not to support military intervention into a friendly country and to remember the grave consequences which might be caused by war for all peoples. Russia will definitely lose from this war, even though those officials giving orders may achieve their defined military goals.

We call on the Ukrainian government and its citizens not to respond by force to the threats of military intervention, not to react to provocations, not to provoke the other side and to take all possible efforts for a peaceful resolution of the conflict. Among these steps should be measures which will ensure rights of the ethnic and language minorities, the achievement of an interethnic accord, and ensuring all fundamental human rights and freedoms.

All of the most difficult problems including issues of the territorial integrity of Ukraine, language policy, elections, etc. can be and shall be addressed in a peaceful and democratic way by the Ukrainians themselves without violence and intervention and interference from the outside.

We call on the citizens and civic organizations of both countries, as well as all other states in Europe to show solidarity and act together in order to avoid war which threats of the vast human and political losses.

We call on the international community – first of all, the Council of Europe, European Union, OSCE and the UN – to take extraordinary and efficient measures to ensure peace, integrity and sovereignty of Ukraine. Among these steps should be the immediate sending of high rank missions to monitor and act as mediators for the situation.

The Russian Federation, along with the United States and Great Britain, should fulfill its commitments on ensuring guarantees of the territorial integrity and sovereignty of the Ukraine under the 1994 Budapest Memorandum on Security Assurances on the denuclearization of the Ukraine.

The world stands on the edge of a war which can bring new incalculable sufferings and undermine the entire system of the international security and international organizations. This possible tragic development should not be allowed to happen. The sliding towards war should be immediately stopped by joint efforts. We, the representatives of the civil organizations of Russia and the member states of the European Union, together with our Ukrainian colleagues, are ready to use the potential of our organizations and contribute to peace and restoration of good neighborly relations between our countries.

EU to come up with firm response to Ukrainian crisis, Barroso says 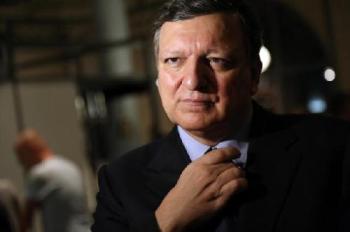 In his remarks in the margin of the event “A Soul for Europe” in Berlin, Barroso stressed the need to show “our commitment to the sovereignty of Ukraine,” citing numerous contacts with the Ukrainian and Russian authorities over the last few days.

Meanwhile the EU is preparing a package of support to Ukraine, in particular working with the IMF, Barroso said. “We keep our willingness to offer Ukraine the political association and economic integration through the association agreement, and also the free trade agreement. But there are some difficulties in that country to which we have to respond through emergency measures,” he underlined.

Barroso stressed the urgency to do everything possible, together with the EU’s international partners, “to avoid the escalation, to avoid the lack of respect for the sovereignty of Ukraine.” (EU Neighbourhood Info)

Moldovan citizens will soon be able to travel to the EU’s border-free Schengen area without a visa, under a draft law approved by the European Parliament today and already informally agreed with the Council. Moldova is the first Eastern Partnership country to meet all the requirements for visa-free travel laid down in the Visa Liberalisation Action Plan.

Moldovans who have biometric passports (with a chip storing the holder’s facial image and fingerprints) would be able to travel to the Schengen area for 90 days within a 180-day period.

“The visa-free regime is one of the most concrete elements of relations with the EU and one of the most tangible measures, particularly important for the people, especially young people. Moldova is starting a new chapter. The government should continue with its European journey and I warmly welcome future efforts to be made in this regard,” she added.

Following Parliament’s approval, the Council is expected to formally endorse the amended regulation by April at the latest, subject to legal and verification of the texts in all languages. “The visa-free regime for Moldovan citizens should then be applicable before summer,” said Fajon.

Moldova lifted the visa requirement for EU citizens on 1 January 2007.Its citizens already benefit from a visa-facilitation agreement with the EU in force since January 2008 (an upgraded agreement took effect in July 2013). According to the Commission, the number of short-stay Schengen visa applications from Moldovan citizens has remained stable over the past three years (oscillating between 50 000 and 55 000). Also, many of them already hold a Romanian passport. (EU Neighbourhood Info)