Posted on October 8, 2013 by eaparmenianewsletter

The Eastern Partnership Civil Society Forum (EaP-CSF) expresses its solidarity and shares the disagreement and frustration expressed in the statement of the Armenian National Platform (ANP)  of the EaP-CSF on September 17th regarding the intention of the authorities of the Republic of Armenia (RA) to join the Customs Union and participate in the formation of the Eurasian Union which has led to the failure of the initialing of the Association Agreement (AA) between European Union (EU) and Armenia.

We respect the sovereign right of any Eastern Partner to choose the model and direction of integration with other states. At the same time the sudden character of the statement Serzh Sargsyan, the Armenian president, made on September 3rd with no proper political consultations and public discussions is confusing.

The Civil Society forum strictly condemns non-democratic and non-transparent processes in official decision making, as well as the external pressure brought particularly by the Russian Federation on the EaP countries, which result in such a drastic change of foreign political priorities.

In fact the significant efforts and expenditures of both the EU and the RA in holding negotiations and developing documents during past years have yielded no results. Many programmes, targeted on reform in various sectors in Armenia and on strengthening ties with the European Union and requested resources, failed to result in expected outcomes.  However the most important issue is that Armenia has lost a unique chance to deepen integration and versatile cooperation with the biggest economy of the world and the most stable region on our planet.

What has happened with Armenia is a lesson for both the EU and the Eastern Partnership countries. The success of the process strongly depends on the consistent application of the “more for more” principle, understanding of common interests and the need for multilateral cooperation within the framework of the EaP, as well as informing the public on the negotiation process and the content of the key documents. This experience shows that the EaP faces significant obstacles if there are no clear criteria of implementing  obligations which have been undertaken, and without effective cooperation between the partner countries with each other, as well as the purposeful and wide support of the process of European integration by the society. The Civil Society Forum expresses its readiness to intensify its efforts in working in all three directions.

We expect that the failure to initial the AA between the EU and Armenia will not result in the freezing of Armenia’s participation in the Eastern Partnership and a format will be found that will allow the application of the achievements of the past four years to help the country to continue moving towards reforms.

The CSF supports the efforts of the ANP in promoting the processes of European integration in the country that were envisaged by the EaP Road map and calls the authorities of the RA to increase the level and effectiveness of the dialogue with civil society and, particularly, with the ANP to ensure that the intention to join the Customs Union will not negatively affect this dialogue.

We support the request of our Armenian colleagues for the organisation of parliamentary hearings and to call for a special session of the parliament aimed at evaluating the respective statement of the president of Armenia.

We also call on the members of the Armenian parliament irrespective of their party affiliation to show that they are able to transcend their party positions on the issue of joining the Customs Union and rejecting the Association Agreement with the EU, because this choice goes far beyond the interests of separate political forces but will define the nation’s destiny for many years to come.

The Civil Society Forum of the Eastern Partnership (EaP CSF) welcomes the historic prospect of Eastern Partnership Summit in Vilnius 2013 for Ukraine, Georgia and Moldova to sign or initial Association Agreements with the European Union. Meantime we also express our solidarity and share the disagreement and frustration expressed in the statement of the Armenian National Platform of the CSF on September 17th regarding the intention of the RA authorities to join the Customs Union and participate in formation of the Eurasian Union that led to the failure of the initialling of the Association Agreement between EU and Armenia.

In general, we are deeply concerned with the constant political and economic pressure exercised by Russian Federation towards the Eastern Partnership countries, including the intensification of so called “borderisation process” in conflict regions of Georgia and economic warfare conducted by Russia towards Ukraine and Moldova.

The EaP-CSF would like to underline that what is at stake for the EaP countries  is not a just signing or ratifying the AA/DCFTAs with EU,  but it’s about the establishment of  the democratic institutions,  strengthening of  the rule of law and human rights protection, reducing corruption and eradicating poverty, raising  labour, environmental and social  standards, which would lead to prosperity and the welfare of EaP countries, as well as increased security and peaceful resolution of conflicts.

In general, the whole idea of the Customs Union, represents a political agenda, including the creation of common military and policy forces for internal conflict resolution, a defence center in Moscow, a common Parliament and Executive Bodies, a common foreign policy with Russian Federation, a common educational and banking system, alongside with common Customs and Economic space.

However, in opposition to EU integration process the Russian Federation Customs Union idea is not based on democratic values or conditionalities and therefore cannot be considered as an incentive to domestic reforms.

In line with Commissioner Stefan Füle’s statement we want to stress that “any threats from Russia linked to the possible signing of agreements with the European Union are unacceptable” and Russia should respect sovereign decisions of EaP countries.

The Eastern Partnership Civil Society Forum (CSF) is trusted by political leaders from the EaP countries and the EU, and will continue enjoying the support of the EU and its member states. This was one of the key messages that came out of the fifth annual meeting of the Forum last week, held under the title Together for a European Future. The event brought together over 250 representatives of civil society organisations from partner countries and the EU, as well as senior government officials, diplomats and representatives of the donor community.

In his opening remarks, European Commissioner for Enlargement and Neighborhood Policy Štefan Füle said the Eastern Partnership summit in November should be a summit of delivery. At the forum, the Commissioner was awarded a special certificate ‘in recognition of the support given to the civil society” in the Eastern Partnership countries, a press release from the CSF said.

Mikayel Hovhannisyan from the Eurasia Partnership Foundation in Armenia said civil society in his country stands for the highest possible level of integration with the EU.

Leila Alieva from the Centre for National and International Studies, Azerbaijan, pointed to a highly polarised society in her country and urged the EU “to strike a right balance between promoting values and pursuing its energy security policy.”

Andrej Yahorau, representing the Belarusian Centre for European Transformation, spoke in favour of promoting reforms in his country rather that “superficial monitoring” of the reforms.

A representative of the Georgian Foundation for Strategic and International Studies Kakha Gogolashvili said civil society should be operating in the space between the government and the public, working actively with both. (EU Neighbourhood Info) 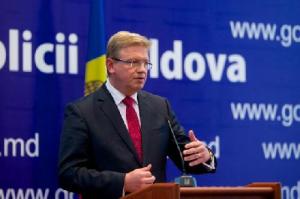 Civil society is at the heart of the Eastern Partnership (EaP), European Commissioner for Enlargement and Neighbourhood Policy Štefan Füle has told the Civil Society Forum meeting in Moldova, expressing his support for its role “in promoting our shared values”, and pledging significant EU funding opportunities to support its efforts to participate in the implementation of national reforms and democratic development.

Pointing to the motto of the Forum – “Together for a European Future” – Füle added: “There is no doubt in my mind that for all six [eastern] partners, the future is European.”

“Civil Society is at the heart of the Eastern Partnership,” he said in his speech. “The European Union and the Partnership are values based; this includes first and foremost human rights. Equality and non-discrimination as well as freedom of expression and assembly are core rights.”

The Commissioner was addressing the 5th Meeting of the Eastern Partnership Civil Society Forum in the Moldovan capital Chisinau today, the first time that the Forum is taking place in a partner country.

He said much would be at stake at November’s Eastern Partnership Summit in Vilnius: “Work still remains to be done if Vilnius is to become a stepping stone in the history of the partnership. Both the partners and the European Union know what they have to respectively do to create the conditions to make Vilnius a Summit of delivery.”

Füle listed the achievements that he hoped the EaP could celebrate at the summit:

The Commissioner said political reforms were central to the successful transformation towards deep democracy. “Genuine cooperation between governments and civil society is necessary to establish independent judicial systems or introduce systemic anti-corruption measures, both of which are necessary elements for long-term political development and sustainable economic growth. Governments should be held to account, and this is the role not only for other branches of power but also for civil society,” said Füle, adding: “The involvement of all actors is indispensable if we wish to succeed in achieving our shared goals. No government can succeed in such an endeavour without broad support of the people.”

The Commissioner said the Civil Society Forum had established itself as a permanent feature of the work of the EaP, adding it was important that it complement the governmental track of the Eastern Partnership, and provide specific input and recommendations to help evaluate and promote the partnership.

Füle said the EU would provide whatever assistance was required, as efficiently and effectively as possible, and would continue to make significant funding opportunities available to support civil society.

He said the European Commission planned to launch, towards the end of 2013 or early 2014, a new regional Call for Proposals under the Neighbourhood East Civil Society Facility: “The Call, with a budget of around € 3.85 million, will mostly contribute to strengthening the capacities of civil society organisations from partner countries by allowing them to benefit from the experience of European Union civil society organisations. It will also contribute to supporting public authorities in engaging with civil society in a more efficient manner.”

The Commissioner acknowledged that the struggle for core rights was not always easy. “Unfortunately, in the last year we have once again witnessed attacks on civil society activists and in some cases, even their unlawful detention or imprisonment. The European Union will not accept the use of violence or intimidation against those who express their views peacefully.”

But, he concluded: “Strengthening the capacity of civil society has been one of the most important and positive results of our cooperation with the Eastern Partnership. We have given Civil Society in Eastern European countries unprecedented support in both political and financial terms. And we intend to continue.” (EU Neighbourhood Info)