Posted on September 10, 2013 by eaparmenianewsletter

The Steering Committee of the Civil Society Forum of the Eastern Partnership (EaP) expresses its deep regret with the statement of the President of the Republic of Armenia  Serzh Sargsyan on Armenia’s intention to join the Customs Union. The consequence of this step would be a setback in the level and effectiveness of Armenia’s engagement in the Eastern Partnership, and in particular would negatively affect the perspective of the EU-Armenia Association Agreement.

Recent developments in Armenia where civil rights activists including members of the Armenian National Platform of the Civil Society Forum have been attacked by unknown assailants, is seen by many as  an attempt to intimidate those people in the country who do not agree with the decision by President Serj Sargasyan to sign a customs union with Russia, Belarus and Kazakhstan.

The Steering Committee of the Eastern partnership Civil Society Forum condemns these methods which mark a retrograde step for democracy in Armenia which can only be  based on a dialogue between citizens and an open debate on public policies.  We demand that the Armenian authorities move vigorously to identify and punish the assailants and ensure that incidents like this are prevented in the future. The SC declares that it will monitor the situation in Armenia and will not hesitate to draw human rights infringements to the attention of relevant bodies.

About The Acts of Intimidation  Towards Armenian Civic Activists 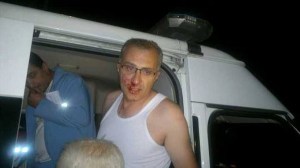 On September 5, 2013 around 22:10-22:20, in the neighborhood of Koghbatsi Street of Yerevan, a few steps away from the RA State Revenue Committee, near his garage Haykak Arshamyan, Project Coordinator of Yerevan Press Club, and Suren Saghatelyan, Board member of Transparency International Anti-Corruption Center, were brutally attacked by 6-7 unknown men. Haykak Arshamyan and Suren Saghatelyan were hospitalized with severe injuries, contusion and fractures. The two civic activists are public figures and carry out their social activities within a legal framework.

Yerevan Press Club and Transparency International Anti-Corruption Center are actively involved in the activities of the Eastern Partnership Civil Society Forum. Haykak Arshamyan during the last two days largely participated in the civic protests against the announcement made by Serzh Sargsyan in Moscow regarding Armenia’s decision to join the Customs Union, which took place in front of the RA presidential residence and the headquarters of the Republican Party of Armenia.

We, the undersigned, assess the attack as an act of intimidation aimed at all those, who have raised a voice of protest against the Armenian authorities, including NGOs, independent media, public figures and active citizens. We consider this to be a consequence of the prevailing climate of impunity in Armenia, human rights violations, selective law enforcement, the usual practice of political prosecution, the manifestation of which we have also witnessed during the recent days, as repressions were used against activists protesting the controversial construction work at Komitas Street 5 and in front of the Yerevan municipality.

We declare that the full responsibility for this act of intimidation falls on the authorities of Armenia, particularly the law enforcement bodies. If this crime is not solved as soon as possible, it will allow us to declare that this act of violence is directly sponsored by the Armenian authorities.

We urge the civil society and all the free citizens to remain strong, not to retreat before the hired thugs and their patrons, to continue the struggle for their personal rights and freedoms.

The statement is open for signatures.