Posted on March 7, 2012 by eaparmenianewsletter 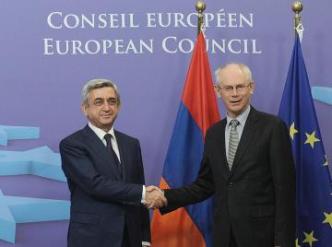 Thank you, Mr. President and allow to once again express my satisfaction with today’s meeting. I would also like to once again congratulate you publicly on your reelection as President of the European Council and express confidence that during your tenure our relations with the EU Council will register new success.

The agenda of our today’s meeting has been pretty full, which testifies to the dynamic nature of our relations.

We have discussed today with Mr. Rompuy issues related to Armenia-EU cooperation and spoke about our future actions. We stressed the importance of quite good developments currently present in the relations between Armenia and European Union and reiterated our determination to constantly deepen our cooperation in various spheres, aimed at the reformation in the areas of economy, good governance, democracy, human rights, rule of law and all aspects of social life.

We have also touched upon the process of the wide-range reforms which are conducted in accordance with the European standards and reiterated that these reforms constitute part of our general agenda with the EU.

We also underscored that progress registered in our negotiations on the Association Agreement testifies to the common approaches and understanding of the parties on the fundamental issues. We have noted with satisfaction that in the nearest future we will launch negotiations with EU on the creation of the Deep and Comprehensive Free Trade Zone. We have also highlighted the importance of the negotiations on visa facilitation with the EU countries which kicked off quite recently in Yerevan.

We have also spoken about recommendations pertinent to the South Caucasus states which were adopted by the EU Council on February 27. I stated my satisfaction that in the section related to Armenia, the EU position concurs with our approaches. It clearly reflects progress achieved in our relations on all critical issues of our agenda.

Particularly gratifying are recommendations related to the NK conflict. They once again reiterate the fact that positions of Armenia and the international community, including EU, coincide. We have stated on many occasions that people of NK are part of the European family and carriers of the same values. Armenia has stressed more than once the necessity of direct contacts with the authorities of Nagorno Karabakh.

With Mr. Rompuy we spoke also about cooperation in the area of human rights which in recent years has become rather active.
Meetings in the framework of the Armenia-EU dialogue on human rights have already taken place three times, which, in mutual assessment, have been conducted in an open and constructive atmosphere.

Such mechanism is providing a reciprocal opportunity to discuss issues of mutual interest and concern, as well as to discuss prospects of concrete cooperation in the area of protection of human rights.

We have also spoken about the upcoming parliamentary elections in Armenia. I have noted that the leadership of Armenia is truly determined to organize and conduct parliamentary elections in May, 2012 in accordance with the international standards. We are unwavering in our resolve to give a new impetus to the comprehensive reforms conducted in Armenia. With this regard, organization of free and fair elections is of pivotal importance. I thank you for an engaging conversation and we are looking forward to seeing you in Yerevan. Thank you for keeping your promise.

On March 1st, 2012 Yerevan’s Congress hotel hosted the meeting of the Armenian delegates of the EaP CSF attended by the representatives of the other NGOs as well, members of CSF Armenian National Platform (ANP). The meeting was chaired by Seyran Martirosyan, the ANP national coordinator.

The meeting attendees discussed the issue of making changes in the organizational principles of ANP agreed on November 21st, 2011. B. Navasardyan, the President of Yerevan Press Club mentioned that the recommendations on the ANP organizational principles should be presented by the next meeting of the CSF delegates enabling the final decision on it at the next meeting. Two recommendations have been made so far, the first one by Vache Kalashyan who had orally recommended  to switch  to the ANP procedure adopted in June, 2010, and the second recommendation referred to the option developed by the Yerevan press Club. It was mentioned that the 4 out of 36 Armenian delegates of CSF, namely, the “Ecoteam”, “European Integration”, “Association of Young Lawyers” and the “European movement” haven’t yet confirmed their interest in joining the CSF delegates session and are not considered the part of that body.

Regarding the draft report titled “Strengthening of civil society in the Eastern Partnership Countries, including the question of cooperation between government and civil society, and the question of the reforms aimed at empowerment of civil society” developed by the Euronest Committee on Social Affairs, Education, Culture and Civil Society, it was decided to send all the recommendations to Levon Barseghyan, the President of Asparez,  Journalists Club of Gyumri for him to combine and present those as one package to the National Assembly.

The received recommendations will be summarized by co-rapporteurs Artak Zakaryan and Ilana Malinova Yotova to be then presented to the Bureau for the adoption at the General Assembly to be held in Baku in April, 2012. It was mentioned that the Report has a consultative status and will serve as a guide for the NGOs on their way for provision of their rights and freedoms, adding capacities, uniting and cooperating with the government.

The meeting of the Armenian delegates of the EaP CSF with Zohrap Mnatsakanyan, the RA Deputy Foreign minister 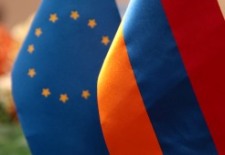 The members of the EaP CSF Armenian delegation attended by CSF Armenian National Platform member NGOs met the RA Deputy  Foreign    Minister Zohrap Mnatsakanyan on March 1st who presented the current situation and perspectives of Armenia’s cooperation with the EU. “I am sure, that our  relations with the EU that are based on the common values will help us to realize our vision, namely, to build a country based on  european standards. There is a wide political consensus around this approach in Armenia”, mentioned the Deputy minister.

Mr. Mnatsakanyn statted that the Armenia-EU cooperation has recently been activated in all levels. He spoke about the progress on the negotiations of the current basis of the EU-Armenia relations, the cooperation agreement, and especially the Association agreement. He said that the Agreement on the Deep and Comprehensive Free Trade Area (DCFTA) is deriving from the latter, but the DCFTA has a rather independent development which can have a big significance for the development of our economy, the enlargement  of competitive field and for making our market more recognized.

Mr. Mnatsakanyan presented the nature and structure of the Association agreement mentioning that the negotiating team is working with a big responsibility and with a clear understanding of the interests of our country.

The civil society organizations had the chance to express their views on the negotiating process of the Association Agreement. Larisa Minasyan, the director of Open Society Foundations Armenia mentioned that since the agreement hasn’t yet been  signed its important to have the views of the Armenian civil society somehow expressed in the Agreement.

Stepan Grigoryan, the head of the “Globalization and Regional cooperation analytical center”, Hovsep Khurshudyan, the coordinator of the National Citizens’ Initiative and Tamara Abrahamyan, the President of the “Araza” NGO also expressed their viewpoints. Hovsep Khurshudyan was concerned about the fact that despite the announcements on wide processes within Armenia’s euro-integration, the country has no progress. the economy’s monopolization is enlarging, there is no progress in addressing the poverty, establishing social justice, protecting human rights and in many other spheres. Mr. Khurshudyan stated, “I have such a feeling that only the Ministry of Foreign Affairs is being euro-integrated, for the rest everything is the same.” Ms. Minasyan and Ms. Abrahamyan were concerned about the fact that the civil society has no opportunity of getting information, attending discussions and making recommendations on the provision of Association agreement which is unfair in terms of democratic principles. “If I haven’t been the part of the discussion and adoption of the document, I cant be its bearer and therefore wont be able to inform and prepare the society for it, definitely I wont be able”, mentioned Ms. Abrahamyan.

Zohrap Mnatsakanyan mentioned that the resource of the civil society, namely, the analysis, assessments and observations are being seriously researched and considered. “Concerning the cooperation mechanisms, my today’s meeting with you is aimed at that. We want to hear your opinions and recommendations and are aiming to make this kind of meetings and discussions frequent”, stated Zohrap Mnatsakanyan, the Deputy Foreign minister.